With wins against a solid Montreal Canadiens group and a hot Edmonton Oilers squad, are the Minnesota Wild finally getting their footing in the regular season? 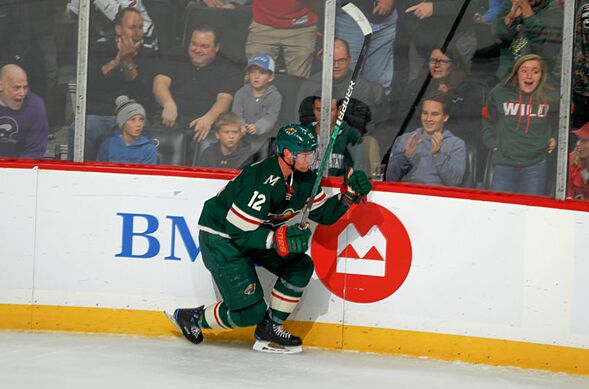 SAINT PAUL, MN – OCTOBER 22: Eric Staal #12 of the Minnesota Wild celebrates after scoring a goal against the Edmonton Oilers during the game at the Xcel Energy Center on October 22, 2019, in Saint Paul, Minnesota. (Photo by Bruce Kluckhohn/NHLI via Getty Images)

The short trip at home seemed to do wonders for the Wild squad. I refuse to put the Minnesota Wild’s slow start on the fact that they only played three home games in the first three weeks, but I have to believe the players enjoyed getting settled at home to do their job.

When recapping the Canadiens game, I made it clear that the Wild were playing a tired squad, so the win should be taken with a grain of salt. The next game, the Minnesota Wild dominated the Edmonton Oilers, handing them their second regulation loss. Eric Staal finally gets his first goal (and subsequently his second) of the season and Mats Zuccarello registered his first point with the Wild. Further, Brad Hunt continues his power-play dominance scoring another goal with the man advantage, which puts him tied for 1st in the league in PPG for defensemen.

It seems that the Minnesota Wild are finally working as a team, executing crisp, concise passes, playing team defense, and executing on opportunities.

So are the Minnesota Wild back? Well to be back, that would imply that the Wild were there in the first place, and we can all agree that the start of the season left much to be desired.

I’m not going to say their back just quite yet. It’s two games, just like I said in the preseason and regular season with the slow starts and back to back losses, it’s too small of a sample size to tell. It’s nice to see that they’re playing much better hockey though, the team has certainly improved from the beginning of the year.

With tonight’s game, there are extra challenges:

Devan Dubnyk left Tuesday’s game early in the second period after hitting the ice hard. He will not play tonight against Nashville. He could return as early as Saturday. Alex Stalock will start, Kaapo Kahkonen will be in a backup role (

Joel Eriksson Ek is still out recovering from the Shea Weber barrage. He could also return as early as Saturday.

According to Bruce Boudreau, Jordan Greenway woke up today not feeling well. After the hard check Tuesday, there could be concussion concerns for Greenway. Feeling ill supports that theory.

Kevin Fiala is Day to Day but will miss tonight’s game against his old Predators.

Victor Rask skated this morning and is likely to return to the lineup tonight.

Ryan Donato creates a conundrum for the Minnesota Wild. If they play him tonight and then he was to be assigned to Iowa, he would have to pass through waivers. It might be worth sending to Iowa for a stint to gain confidence, but the Wild squad is already short-staffed as is with the injuries. I imagine he plays. He’s too good to be off to this slow of a start. Hope he turns it around.

Let’s be optimistic, I believe the Minnesota Wild play better defense when Alex Stalock is in net, not because he’s a backup, but because he’s unpredictable. He loves playing the puck and the skaters cover for him.

When providing a prediction for tonight’s game, I’m going to be optimistic. I think the Vets are going to get it done tonight. Zach Parise, Mikko Koivu, and Mats Zuccarello (gets his first goal in a Wild jersey) put the puck in the net tonight. Alex Stalock builds off the momentum against Edmonton and the defense lock it down tonight.