GLENDALE, ARIZONA - DECEMBER 19: Goalie Devan Dubnyk #40 of the Minnesota Wild is congratulated by teammate Victor Rask #49 following an 8-5 victory against the Arizona Coyotes during the NHL hockey game at Gila River Arena on December 19, 2019 in Glendale, Arizona. (Photo by Norm Hall/NHLI via Getty Images)

Despite injuries to three of our top nine forwards, the Wild continue to consistently play good, tough games against strong opponents. With Devan Dubnyk back and the improved team performance, I’ll answer your questions on all things Minnesota Wild 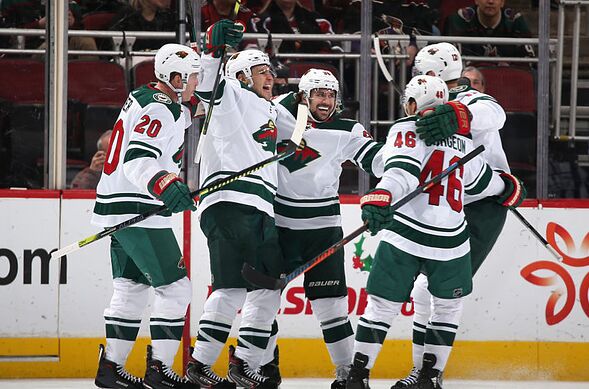 GLENDALE, ARIZONA – DECEMBER 19: (L-R) Ryan Suter #20, Zach Parise #11, Mats Zuccarello #36, Jared Spurgeon #46 and Eric Staal #12 of the Minnesota Wild celebrate after Zuccarello scored a goal against the Arizona Coyotes during the third period of the NHL game at Gila River Arena on December 19, 2019, in Glendale, Arizona. The Wild defeated the Coyotes 8-5. (Photo by Christian Petersen/Getty Images)

Our first question today asks about what happened to Jason Zucker?

What happened to Zucker that he would be out "week to week"? Looked like a simple dump in caught him in the hamstring.

Here’s the video referring to the incident:

Oh no. Jason Zucker is on the ice hurting. Took a Seabrook slapper right to the body. pic.twitter.com/33kvLvM16i

So, it wasn’t just a measly dump in, it was a full-on slapshot from Brent Seabrook about 25ft away. Seabrook took place in the NHL’s Hardest Shot competition in 2015 and recorded a 98.6mph shot, from five feet farther. I’m not saying he got that sort of speed on this dump in, but he’s known for having a stiff shot.

Zucker’s listed as week-to-week. He joins Mikko Koivu, Joel Eriksson Ek, and Greg Pateryn on the injury list. Holiday break can’t come soon enough. I’m sure the boys would like to get healthier.

What do we do at the deadline?

That’s a spectacular question. Bill Guerin has been adamant about not making moves early this season to allow the team to build chemistry and show their value to the new general manager. Now that the team is actual performing, I have to imagine Bill Guerin doesn’t want to interrupt that mojo.

Where the Wild have plenty of depth is at defenseman. Because of the emergence of Carson Soucy, the already crowded defensive core has less availability, so that’s where I would see trades coming from- namely Nick Seeler and Greg Pateryn, but you wouldn’t get much in return.

I wouldn’t be surprised if they moved a goalie, probably Devan Dubnyk, but they likely won’t do anything while his family matters are still ongoing, out of respect.

The other possibility is moving a forward to create an opening for Kiril Kaprizov in the future. Theoretically, they could elect to not resign Mikko Koivu after this season, and then move either Kunin or Donato off the wing and into the center position, but I have to imagine that if Mikko wants to return, Guerin will resign him.

With his improved performance, you could likely trade Victor Rask, but that demotes Kunin or Donato to the fourth line.

What happens at the deadline will largely revolve around how the Wild are performing at that time. If they regress and struggle again, I believe Guerin makes moves to create spots for the future of the Wild. If they’re contending, I imagine Guerin has a quieter deadline day than most.

The Hat Trick (aka 3rd) Question of the day:

Are the Wild a Contender or Pretender? Which one and why?

It depends on who you ask. According to Moneypuck.com…

… the Wild are around the top ten to win the cup. If you asked The Athletic’s stat genius Dom Luszczyszyn, the Wild might scrape into the playoffs, but likely won’t get far.

The Minnesota Wild are firmly on the bubble, plain and simple. If you subscribe to the belief that the play of the team in the last month is the real Minnesota Wild, they’re a playoff team and thereby a contender for the Cup. Low-seeded teams make playoff runs all the time. Los Angeles Kings were an eight seed, Colorado was a Wild Card team last year. It happens.

If you subscribe to the belief that the team is just on a hot streak and will regress, then they likely aren’t a playoff team. But c’mon. This team has been significantly better than their performance in the first month of the season. Even riddled with injuries, the Wild managed to complete the Season Series sweep against the Pacific division-leading Arizona Coyotes. I think this team is for real.

The Penultimate Question of the Mailbag

Are the Wild looking to make moves? (Trades) or are they in kind of a wait in see phase here?

I mentioned it in the question about the deadline, but I have to believe that Bill Guerin isn’t looking to make any moves at this moment. Much like earlier in the season when he wasn’t going to make a knee-jerk trade to try to fix the Wild’s woes, I doubt he makes a trade now when the team is performing rather well, at least from the most active players.

I could see moves being made if Nick Seeler or Greg Pateryn is involved, but they have to get more ice time so teams can see how they’re performing. Pateryn is yet to get in a hockey game this season. This will also be difficult, as the Wild are still working on climbing out of the hole they put themselves in with the standings earlier this season.

Do u think it would be better for the wild to continue to win the majority of their games and make the playoffs as a wildcard, or have this last month be a too good to be true stretch of good hockey and have them sail to the bottom of the standings again?

Another spectacular question (frankly all of the questions are great). Here’s been my viewpoint about this season of the Minnesota Wild from day one:

Whether or not the Minnesota Wild have a spectacular season and go on a cup run, or have an incredibly tough year and get an early draft pick, the Wild are playing with house money.

Here’s what I mean; the national expectation for this squad was to be a bubble team for the playoffs and perhaps be just good enough to get in, but not good enough to be a threat for Lord Stanley.

I believed this team was going to be much better than that and shock national media, have a good year, and continue getting better with the younger players we’d add- like Kaprizov and Sturm.

Then we had our horrific start (4-9-0), and I proclaimed it was time to rebuild.

And then a month later, I put the rebuild on hold because maybeeeeee this team was not the team that took the ice and led us to the horrific October and early November.

I’m fully in on this Wild team now. This team has incredible depth, scoring ability up and down the lineup, and are playing a brand of hockey that is just excruciating to play against.

The Wild have bested arguably the two best players in the league (Connor McJesus and Leon Draisitil) twice now.

They’ve gone toe to toe with the best teams in the league, their play is still improving, and they aren’t even entirely healthy.

Thanks for the plethora of questions today! It was super fun to hear from y’all.

Also thanks for reading my material this year! I’ve enjoyed every second of this opportunity to put my thoughts and feelings on the Wild out there for y’all, whether it be about the struggles of the 2018-2019 season, Free Agents over the Summer, maybe being too intense about the prospect of trading Jason Zucker away, and talking about the future of the Wild.

Have a great holiday! Go Wild